M’sian Shares How a Scam ‘Cleaning Service’ Stole RM18,700 From His Account Without TAC Number

Scams are on the rise nowadays and have started to imitate important essentials such as cleaning as well as maid services.

Recently, a Malaysian took to Facebook to share how scammers from a ‘cleaning service’ managed to get into his bank account and take out over RM18,700.

“️SCAMMER service for cleaning houses, phising payment websites and malware apps for an order of Rm40 turned out to be Rm18,700,” he wrote.

“This it the story of how I lost the money in my bank account after paying for a house cleaning service. I wouldn’t have ever expected that this would happen so quickly. And wasn’t expecting that they’d be able to steal my money,” he added.

He explained that an advert which was promoting house cleaning services on Facebook caught his eye. He then clicked on the button which led him to a WhatsApp chat.

“During the conversation, I was asked to reserve my booking through an application which they asked me to download through a link they gave me. The app is called My Maid.”

“I then filled up the form in the app and booked their service. When it came to the payment part, there was only payment via FPX and I chose to pay via Maybank2u,” he explained.

He said that when he tried to enter his username and password, it came up with an error and said that it was incorrect, even though it was correct.

After several attempts of trying, he snapped a picture of it and sent it to the number. The number then told him that his booking has not gone through and that they could instead take payment after the service.

He went on to call Maybank and whilst waiting for the customer service to answer his call, 2 more transactions were performed.

“All of my savings were gone in just the blink of an eye.”

The transactions were performed without him receiving a TAC number from his phone.

Unexpected as it happened too quickly

Nor Izzudin continued his post by saying, “You guys might think that it’s my fault as I was hooked through downloading the app and making payment through it. But I never expected that scammers do it this way to get our information. So I’m sharing my story so others do not fall into the same trap.”

“What’s strange is that no TAC was sent to my number. Normally any transaction to a third party would need a TAC number of a verification.” 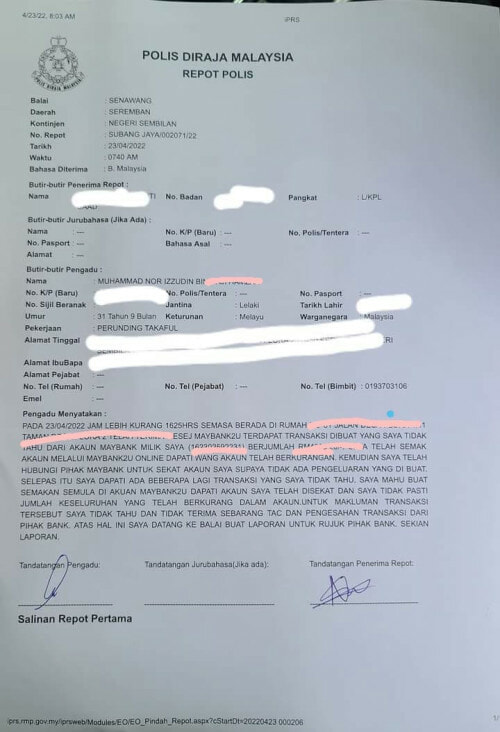 In the post which was dated 23 April, Izzudin said that his Maybank account was frozen and only incoming transactions were allowed.

“I am asking for your prayers that my request is successful and that the money I lost is returned. The money which I lost was huge for me. It included EPF money as well as my commission from work.”

How they managed to do it without a TAC number

In an update, Izzudin believes that they managed to surpass the TAC requirement by making him install malware.

“The app I installed is malware which managed to make it that the TAC number is sent to their number instead of mine without my consent. They can’t hack the banking system but they can hack through us.”

As a closing note he said that there were 4 transactions in total. The first was before he called Maybank and the other 3 was whilst he was waiting for the customer service to handle his call. 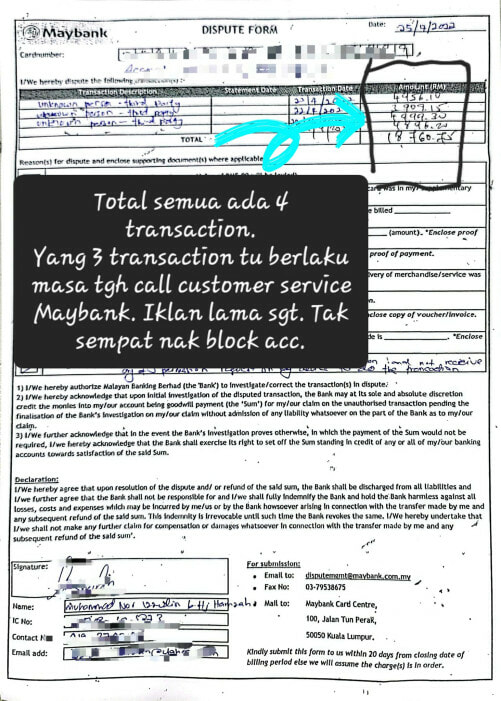 We hope that this serves as a reminder to everyone to be more careful with their banking details and to not be easily fooled by random adverts on social media.

M’sian Shares How a Scam ‘Cleaning Service’ Stole RM18,700 From His Account Without TAC Number