Mark Mullert has been doing the handyman thing for the past three years. He’s seen houses with debilitating damages, a problem all too common for low-income and older members of the Swannanoa Valley community.

“A guy whose hot water heater had a leak and then had so much wood rot it had fallen through the floor,” Mullert said. “He hadn’t had hot water in five years.”

The plumbing in this house, coupled with a multitude of other issues, only made the other problems worse. Mullert said the man didn’t know how much it would cost to fix everything and was afraid to ask for help.

“He was flushing the toilet with a five gallon bucket. He had about 20 roof leaks with pots and pans and different things around,” Mullert said. “Most of the floor in the house had rotted out and he was walking from stud to stud.”

This was the first year Mullert said he took on a project of this magnitude. He took his team in to do the job right. After fixing up everything they could, Mullert hired a plumber to take care of the remaining issues.

The man asked Mullert how much he was owed but the handyman declined payment, saying it had been an honor to help. The man insisted on writing a check but Mullert had a better idea.

“I said, ‘Well, you write it to somebody else who you think needs a hand,'” Mullert said.

Hammer & Heart exists to provide home repairs and maintenance services for residents in similar situations. This includes lower income homeowners as well as older or disabled members of the community whose houses are often their main investments.

According to Ben Fortson, the chair of the board of the organization, people have been doing this sort of work in the community for years, and Hammer & Heart works to coordinate and combine these efforts. People such as Mullert had been doing extra volunteer work on his own for people he saw needed help.

Mullert realized just how big the need was for home maintenance for those who can’t afford it when he organized a campaign to ‘Nominate a neighbor in need’ via Facebook.

He took off work from Thanksgiving to Christmas, taking his crew of five to address the most urgent needs for three weeks. He hated having to pick and choose which projects to tackle, but it opened his eyes to the serious need in the area.

Mullert saw many sad stories where residents weren’t able to access parts of their house due to degradation. He said nearly half of the projects they received that winter were roof related.

“A couple of these homes are down the road from really, really nice homes, but for whatever reason these people aren’t able to maintain them,” Mullert said

Along with his wife, Kenda, Mullert invited business owners, building contractors and anyone who was interested to meet in 2019 to figure out how to create an organization that could do the work so many people required while maintaining affordability, according to Fortson.

“He got some momentum, he got some interest, but didn’t really know where to go with it,” Fortson said.

In May 2020, Mullert organized a meeting and determined what was necessary to create a nonprofit, a means to raise funds and funnel the money to contractors to get the repair work done. Fortson said Mullert chose five people with specific skills to function as the board, asking Fortson to act as the leader.

“We started meeting once a month to hash out how we’re going to make this happen,” Fortson said.

The board chairman plans for the organization to coordinate with churches, law enforcement, social services and contractors, as well as other nonprofits, to see how best to serve the community. The hope is that if the organization can protect housing from deterioration, it can create an all around better living environment, keeping people in their homes and maintaining the home value through long term repairs.

“We need folks who are in our community, who can see the home repair issues and send them our way,” Fortson said.

Philanthropy through beer:  ‘Give Back with Gaelic’ to help Asheville, SE hospitality workers

Originally starting in Black Mountain, Fortson said the organization expanded its reach to the entire Swannanoa Valley after conducting research on what areas were most in need of assistance. He said repairs are not limited to a specific area and can include electrical issues, plumbing, roof work, accessibility concerns or anything else that if the problem persists, thing will only get worse.

“Or it could be something that’s a hazard to their health,” Fortson said. “Maybe their heat doesn’t work. Maybe they’re elderly and the entrance to their home is rotted so it’s a struggle for them to get in and out of their home.”

Fortson said often, these sorts of homeowners need help but don’t know where to ask for it. Through a careful vetting process, Hammer & Heart determines where the need is for applicants and how to best provide assistance.

While the organization remains in its early stages, Fortson said he hopes to have a few projects completed before submitting an application to officially become a nonprofit. The first project the organization has taken involves building an accessibility ramp, roof repairs and addressing heating and cooling concerns for an older resident in Black Mountain.

“We’re a volunteer organization,” Fortson said. “We need bodies and minds and skills to help us meet these needs in our community.”

Mullert said a main goal of Hammer & Heart is to be agile enough to promptly respond to concerns as they arise. He doesn’t want projects to last for months. He wants people who need assistance to get assistance as soon as possible.

“There’s thousands of dollars more damage if someone’s got to wait six months,” Mullert said. “We’re doing the best we can.” 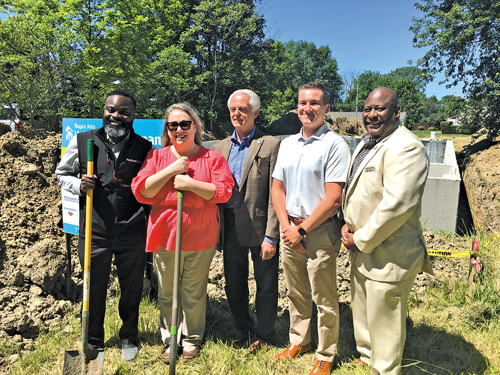 By Michael Gruber, President, Building Industry Association of Stark & East Central Ohio One of the keys to keeping your home comfortable and operating smoothly is regular home maintenance. Homeowners

Regular, Ongoing Expenses Of Owning A Home  When it comes to maintaining a home, there’s more to it than simply making your mortgage payments. Many costs which may not be