Furniture shortages are welcome news for the nation’s upholsterers. 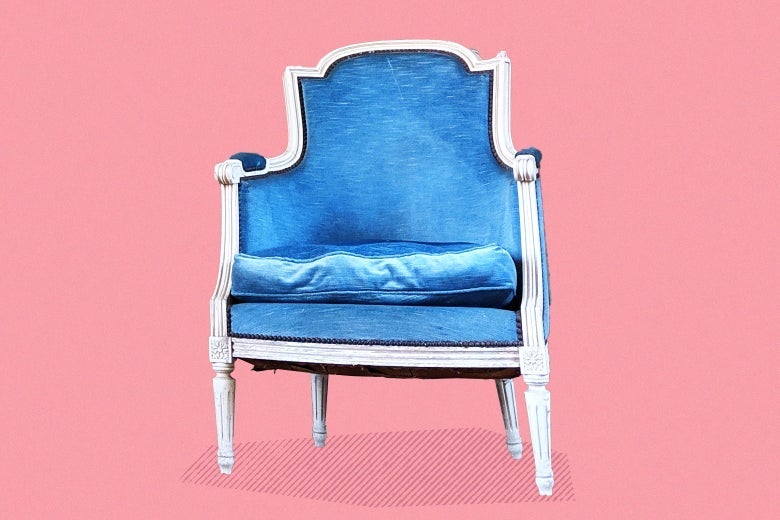 Rachel Fletcher knew things were getting weird when people started showing up with their threadbare armchairs on her doorstep, unannounced, late at night or on the weekend, desperate for her services.

Don’t you do it, too. Fletcher, an upholsterer in Knoxville, Tennessee, closed her calendar last Friday. Another upholsterer recently compared the frenzy outside his own door to The Night of the Living Dead: Despite a locked door and a sign, “they still came dragging their chairs and ottomans behind them, rattling the door and peering with haunted eyes through the glass behind the sign.”

The furniture supply chain is in tatters, and it is the best and worst of times for the nation’s upholsterers, who are so busy fixing up used chairs and sofas that they can barely tell foam from horsehair. For her part, Fletcher is working 50 to 60 hours a week, up from 35 to 40 before the pandemic. “I’m overbooked, overworked, stressed,” she said. “And that’s across the board with reputable upholsterers.”

It is mostly welcome news for the beleaguered practitioners of a trade that belongs more to the world of Charles Dickens than that of Mark Zuckerberg. Upholstery endures, and Facebook is where Fletcher is the admin of the 3,300-strong Professional Upholsterer’s Network, where virtually everyone agrees they have never seen anything like this.

It’s a perfect storm. First, people spent a year at home, staring at and wearing out their furniture. “People sat around thinking, ‘What’s to reupholster? What’s to change?’ ” figures Marian Gorzelany, a co-owner of John’s Upholstery in Chicago, which has a 20-person waitlist for work and has told some clients big jobs may take four to five months to complete.

Second, the pandemic snarled supply chains. Upholsterers aren’t immune to the problems on the floating traffic jam of container ships in San Pedro Bay, south of the ports of Los Angeles and Long Beach, but they are more nimble in their search for fabric and other materials than furniture retailers who depend on finished products coming out of China and Vietnam. As my colleague Aaron Mak wrote in July, “fast furniture” isn’t so fast at the moment. In Chicago, Crate and Barrel offers 259 sofas, but just 11 are in stock and available for delivery. For chaise sectionals, there are 208 items in the catalog, but just two ready to ship. Many buyers have been told they can expect to wait until next year for the perfect couch.

Third, this all comes on top of the high season for chair repair. “We would have been busy anyway, because this is when we prepare for Thanksgiving and Christmas,” said Dale Forbes, a co-owner of Chicago Upholstery and Drapery. That’s doubly so this year, since many Americans postponed traditional holiday gatherings in 2020. “Never in 22 years have we said ‘No,’ ” he continued. “Now I’m turning people away. We said, ‘Put your name in a queue and when we come back in Q1 we’ll take care of you. My business partner said, ‘They’ll go away.’ Now Q1 is full and we’re at Easter.” It’s quite a turnaround for Forbes, who mothballed the business last year to manufacture face masks and hospital gowns.

The current crush of business is a good problem to have. The number of upholsterers has fallen by 30 percent since 2000, as brands like Ikea sling whole couches—stapled, softwood, assembly-line produced in Southeast Asia—that cost less than the locally managed bill of repair for a dowelled sofa with dovetailed joints and eight-way, hand-tied springs.

“It’s a throwaway, disposable society today,” says Frank T. Destro, the author of Professional Upholstering: All the Trade Secrets. “People have the mentality, ‘Oh, I’ll buy that cheaper, I can buy the whole thing and have it delivered for less than what you’re going to charge.’ ” Destro retired last year after 42 years of business in Cleveland. Now, he says, his old friends are trying to lure him back to work.

After the runs on used cars and secondhand clothing, perhaps it is used furniture’s turn. The founders of Chairish, a venture-funded used furniture marketplace, pitch used pieces as a more ethical, sustainable, cooler, and cheaper alternative to new-bought stuff from overseas. The company has sold more than half a million items since it was founded in 2013, and sales rose 60 percent in 2020. “Eighty percent of home furnishings wind up in the landfill,” CEO Gregg Brockway told me. “But sustainability is becoming a more valued characteristic.”

It is not quite as if America is abandoning its love affair with cheaply made imported furniture. On the contrary, the whole reason the supply chain is messed up is because home furnishing imports are way up, with 35 percent more orders this September compared with the same month in 2019. It is the constraints imposed by overwhelming demand, not changing preferences, that have gotten Americans interested in repair and reuse.

But perhaps it could be the start of something great. If upholsterers are navigating the supply chain challenges better than most, they are all in agreement about the other big post-pandemic adjustment, the labor shortage. It is impossible to find help. In Knoxville, Fletcher is also the president of the National Upholstery Association, which she founded two years ago with colleagues concerned about the impact of fast furniture on their profession. “We formed NUA to get the word out that this is a viable craft,” she said. Mission accomplished. You’ll have better luck getting a job in upholstery, right now, than getting your couch fixed.

Do you have a particular sofa project in mind that necessitates the use of fabric? Are you seeking dependable couch fabric suppliers in the UK for your company or DIY