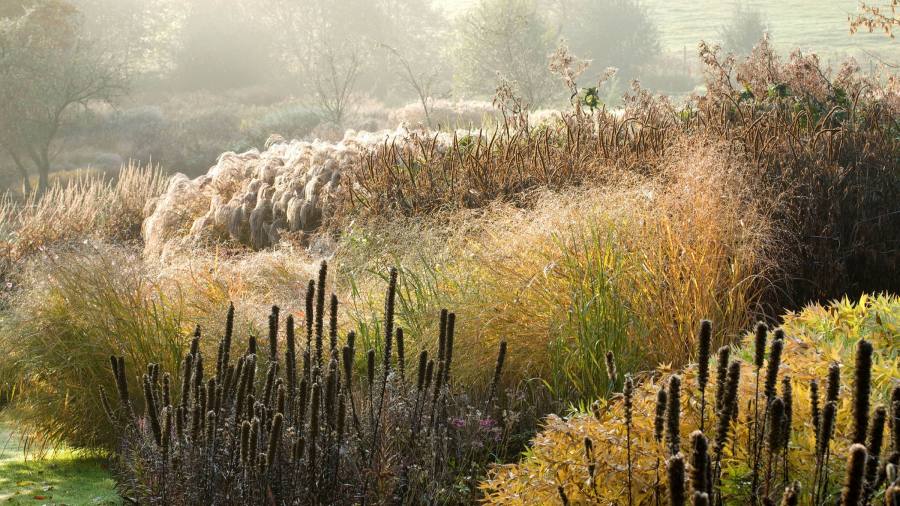 I was recently reminded of the folk song “The Parting Glass”, thanks to a serendipitous playing on the radio. It’s a song full of joy and sorrow; it makes you want to grieve and rejoice at the same time, treading the line between happiness and sadness — and life and death.

The lyrics supposedly date back to early 1600s Scotland. Centuries later, art that tries to capture the beauty of transience remains as engaging as ever. Yet it is only recently that we have started to see this sort of aesthetic in our gardens. A new wave of designers is using decaying and ageing plants as a feature in their own right.

In the relatively short history of gardens as we know them, nature was subservient to us. We wanted to rationalise and put order on it, in the form of straight hedges, topiary, evergreen shrubs and bedding plants. Herbaceous perennials were put to bed for winter, so as not to leave any unsightly brown bits once the summer show had ended.

Now, plants are being chosen for their spent form: flowers not just for their midsummer colour but their autumn seed heads, grasses for their texture in winter and shrubs for the colours of their bare branches. As landscape designers, we are encouraging people to enjoy the full life cycle of their garden.

Even at this year’s belated Chelsea Flower Show, designers Charlotte Harris and Hugo Bugg embraced the changed season of the show and included plants traditionally seen as past their best — as in, when they’ve turned from vibrant flower to seed head — in their gold-medal winning M&G pocket park. This was almost certainly a first for a show garden in RHS Chelsea’s 108-year history.

“The passing of time and decay are a crucial part of any garden,” says Angel Collins, a garden designer who has become known for her vivacious, textured, large-scale planting schemes that delight year-round. “We are so lucky to have our seasons [in the UK] and I like to think that autumn has become more prolonged with the beauty of decaying, naturalistic planting leading into and through winter.” Harris and Bugg exquisitely captured this change in their show garden.

It’s hard to pinpoint where the trend — if we can call it that — started, but from Piet Oudolf’s new perennial landscapes to the private gardens of London, ornamental grasses are still standing in December with frostbitten tops swaying next to the faded glory of their herbaceous perennial companions.

Much has been written about the ecological benefits of leaving “gone over” plants in borders over winter. But there are other ways to encourage this shift towards more biodiverse, climate-positive gardens, and that is through changing our perceptions of what we expect a garden to look like. Dead things can look lovely. Even florists are turning to dried stems for longevity, sustainability and contrasting visual effects.

This embrace of maturity isn’t limited to gardens; we are starting to appreciate the beauty of ageing in other aspects of our lives too.

Award-winning landscape designer Marian Boswall joined the ranks by letting her hair return to its natural colour during lockdown.

“It’s easy to rejoice in this powerful energy you get from being a teenager, or seeing a rose in full bloom, or a tree in full leaf,” she says. “But there’s an equal amount of beauty in a tree that has no leaf, or a rose with hips when it’s caught in frost in the morning light.”

One of Boswall’s most acclaimed gardens is at Reighton Wood in Kent, where winter and summer are of equal importance. Her planting there also blurs the distinction between wild and maintained, another growing theme in gardening that incorporates the whole natural cycle into a design. It’s about working with nature and co-creating in harmony with the land all year long.

As anyone who has tried to establish a successful wildflower meadow will know, however, “wild” does not mean “easy”. All spaces we interfere with require intervention at some point. We can’t just return to a pre-industrial pastoral idyll. But through understanding how plant communities work in the wild we can restore our landscapes to something that looks more natural and is better for the environment. And in their natural habitats, plants don’t disappear during the winter just because they’re not flowering any more.

In their 2015 book Planting in a Post Wild World, Thomas Rainer and Claudia West write about the different approaches ecologists and horticulturalists take to gardening. Having an understanding of both nowadays is nothing short of a superpower. It’s one that north London-based gardener Benny Hawksbee possesses.

“We do have to fight against the ‘tidy’ principles that we have almost all grown up with,” says Hawksbee, who manages a number of private and community gardens across the capital.

“I am passionate about death and decay because I am drawn to and led by nature,” he says. “I have heard it said, and can easily imagine it to be true, that dead wood can give life to more species than living wood.”

Hawksbee manages the Eden Nature Garden in Clapham, where a few years ago he persuaded the council to leave a fallen black poplar tree in situ. Now it is a piece of natural architecture, a seat, and a home for insects.

“As nature intended,” he says, “the mature bark is now gnarled and laden with moss, which glows an almost iridescent green when the conditions are damp enough.” Can you imagine trying to create a design feature like that, without working with nature?

Garden design is a funny job, because you’re only one small part of a big cycle. You facilitate and curate things, but ultimately you know nature is the most powerful influence on a garden. Channelling that power and working with it is how we end up with truly beautiful spaces.

“The role of time is super-important: it’s another whole dimension to garden design and nature and is one of the things that you have to factor in at the beginning,” says Boswall. “You can’t control when you’re not there, and that’s something we have to live with as humans, we’re here for a very short time. But we have to look after what we can while we are here.”

Beyond plants to hard landscaping, there is room for this approach throughout the entire design process. Boswall’s studio tries to use as many natural materials as possible that are of the vernacular local to each of its gardens.

The benefits we can reap from a whole-lifecycle approach can extend further than the gardens we design.

“I think death still remains a fairly taboo subject in western society but
by looking closely at the cyclical habit of the natural world we can learn to accept that every living thing has a time to flourish and a time to die,” says
botanical stylist and garden writer Carolyn Dunster.

“Working with plants in this way has helped me confront my own mortality and to accept that the ageing process is nothing to be afraid of.”

Dunster has written a book on the art of working with dried flowers, and as part of that learnt about the Japanese philosophy of wabi sabi.

“The main principles of impermanence, simplicity, imperfection, melancholy and asymmetry are all elements that come strongly into play in the process of drying and styling preserved plant material. Doing this encourages us to look at nature with new eyes and celebrate the beauty in decay.”

For many this is where we find solace in gardens. They remind us of what is ephemeral, fleeting and transient. As Boswall eloquently puts it, “by honouring things throughout their whole life you understand that they’re not going to be there forever, and neither are we.”

Tabi Jackson Gee is a writer and garden designer Is there a compound word that describes the feeling of alienation induced by really wanting to embrace a new piece of architecture but being viscerally unable to do so? A 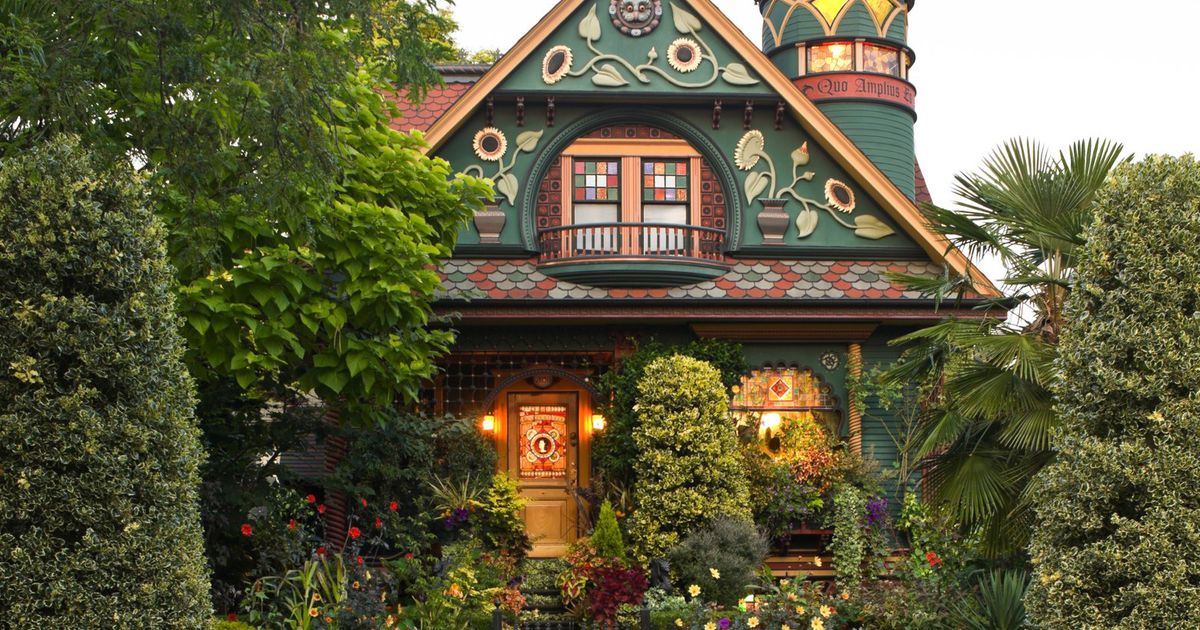 BELIEVE IT OR NOT, this sultry Victorian on Queen Anne was once a humble 1906 house clad in white vinyl siding, with a “pretty” pink, yellow and blue garden skirting

All-America Selections’ 2021 Landscape Design Challenge theme was Diversity in the Garden, inspiring the AAS Display Gardens with a platform to create their own diverse garden using the resources they

Loan and Mortgage
We use cookies on our website to give you the most relevant experience by remembering your preferences and repeat visits. By clicking “Accept All”, you consent to the use of ALL the cookies. However, you may visit "Cookie Settings" to provide a controlled consent.
Cookie SettingsAccept All
Manage consent